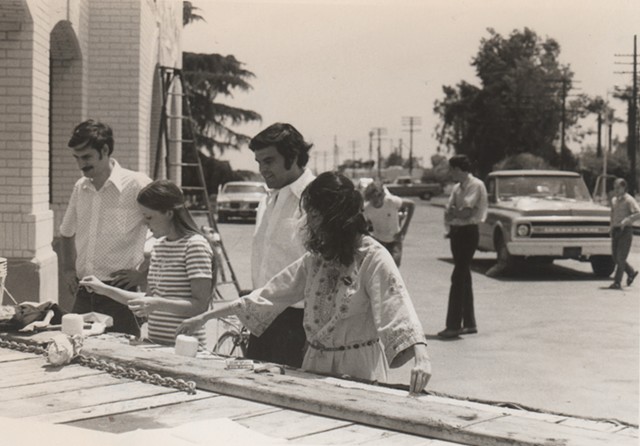 Paul Tully’s contribution to the field of Democratic politics, his training and mentorship to a legion of progressives, and his large gestural memory live on. To celebrate his remarkable life, Paul’s friends and family commissioned a bronze memorial sculpture to serve as a headstone at his final resting site at Rock Creek Cemetery in Washington, DC. Jessica, his eldest daughter, took on the project as lead artist.

Ten years ago the group initiated the monument project which received generous support. The project is now completed and has taken on a scale commensurate with Paul’s magnificent memory. Several of Paul’s greatest colleagues, friends and family have tended to the project over time including Gail M Stoltz, Mark Steitz, Teresa Vilmain, Will Robinson, Ginny Terzano, Ellen Kurtz, Heidi Perlmutter, and Paul’s two daughters, Jessica Tully and Miranda Tully. Paul’s elder daughter, Jessica holds an MFA in New Genres from San Francisco Art Institute. She designed the nearly four and a half foot tall bronze and granite memorial, and worked with the Del Sol foundry in California to cast and assemble the project. It consist of three elements: the wooden work chair from Paul’s home, a folded copy of the New York Times from a very special date in 1992, and two of his ubiquitous coffee cups.

An unveiling event occurred on May 3, 2014, near the time of the cherry blossom bloom, and upon what would have been Paul’s 70th birthday. Currently, we have an open call for stories, images, and historic documents from Paul's life. Please send to jessica@jessicatully.com.

We thank our supporters for helping to complete this living tribute to one of the most unique forces working behind the scenes in American Democratic and Presidential politics during what some would say its most contentious, formative and romantic years – a time with a certain significance and tribe that live on.