WATER > SFMOMA Project Space: The Brains in Her Arms 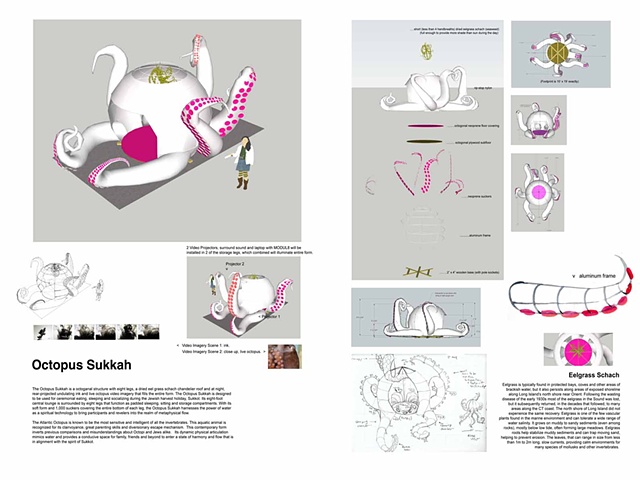 The Octopus Sukkah is a octagonal structure with eight legs, a dried eel grass schach chandelier roof and at night, rear-projected undulating ink and live octopus video imagery that fills the entire form. The Octopus Sukkah is designed to be used for ceremonial eating, sleeping and socializing during the Jewish harvest holiday, Sukkot. Its eight-foot central lounge is surrounded by eight legs that function as padded sleeping, sitting and storage compartments. With its soft form and 1,000 suckers covering the entire bottom of each leg, the Octopus Sukkah harnesses the power of water as a spiritual technology to bring participants and revelers into the realm of metaphysical flow.

The Atlantic Octopus is known to be the most sensitive and intelligent of all the invertebrates. This aquatic animal is recognized for its clairvoyance, great parenting skills and diversionary escape mechanism. This contemporary form inverts previous comparisons and misunderstandings about Octopi and Jews alike. Its dynamic physical articulation mimics water and provides a conducive space for family, friends and beyond to enter a state of harmony and flow that is in quantum alignment. Octopus Sukkah is designed by Jessica Tully, Ivy Tsur, Peter Dering and Jason Stephens in the SF Bay Area. Jessica is a conceptual artist working in video and participatory practices, Ivy is an urban planner, Peter, a former construction engineer turned inventor and Jason, the founder of Recursion Projection Therapy.